It was early November 2008 on a thursday afternoon and I was working at the support department of RES Software when a manager came in asking who wanted to go to PubForum. One of the Pre-Sales guys, who was supposed to go there, was ill and they needed someone to replace him. After I let said manager explain what Pubforum actually was, I called the missus and asked her if it was OK if I flew to Nice for the weekend. She said we didn’t have any plans that weekend so the next morning I sat in a business class seat on  a plane to the south of France. This is where I experienced that business class on a City Hopper in Europe is nothing more than a curtain between the first few rows and the rest of the plane an a slightly better meal.

In Nice I would meet my colleague Max Ranzau, the illustrious RESGuru and I would have to support him while he was representing RES on that event as sponsor, presenter and MasterClass trainer. I had quickly grabbed some t-shirts and some RES branded goodies so I would not arrive empty handed. That weekend I fell in love with Pubforum and the love is still strong after almost 10 years. And sometimes I kid myself into thinking that the feeling is mutual. It resulted in the fact that I was named Pubforum Grandfather in 2013, a ‘prestigious’ ambassador role that I don’t take lightly.

It turned out to be an excellent choice to send a technical person to the event rather than a commercial one because Pubforum was (and is) a very technical event and its attendees are a bit allergic to Sales pitches. I blended in nicely and got to meet a few people I knew from Support Cases they had with me but so far I only had telephone conversations with them. RES wasn’t very well-known in that community at the time; I remember one of the attendees saying: “RES? Ah, you’re the guys sponsoring our drinks, thanks”. Over the years that very same community got to know and appreciate RES and I like to think I played a role in achieving that. After skipping the 2009 edition I rarely missed a European event and even made it to two editions in the US. In almost all occasions I was the liaison between RES, the sponsor at one end and the organization and the attendees at the other end.

The remark about the drinks was not a coincidence and it illustrates a big problem for Pubforum. If you put 100 adult men in a hotel during their free weekend there will be a few drinks involved. And sometimes a bit more than a few, which gave the event a questionable name. Along with the name Pubforum it made managers reluctant to approve requests to go to the event on the company’s expenses. So the name changed to E2EVC (Experts to Experts Virtualization Conference) and the organization became more professional. Today E2EVC is still highly technical and attendees gladly ‘sacrifice’ their weekend to listen to interesting presentations held by their peers and meet people who are fighting the same battles they do every day. If anything, E2EVC is a great networking event where everyone (CEO, junior admin, consultant) is equal and only Ales Cooper, the organizer, rises above the crowd to make sure we all have a great event. He is only capable of doing this because he is supported by his lovely assistants, the Cooper Sisters. 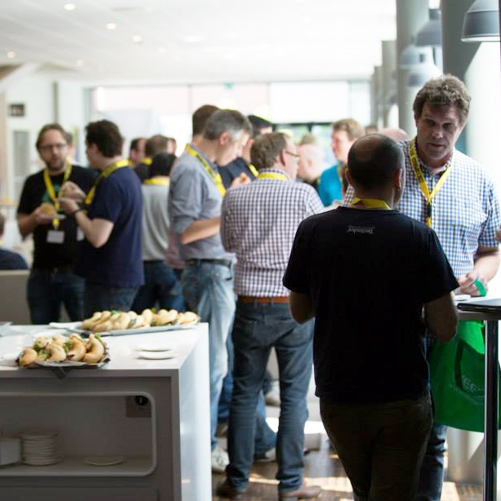