I'm preparing to go to the E2EVC event in Athens on 1 November, so it's about time I publish my report from the last event in Amsterdam

In the weekend of 7-10 june 2018, I attended E2EVC - The Event Formerly Known As PubForum - in Amsterdam. This event is organised several times a year in various cities around the world. On this occasion, the Volkshotel in Amsterdam was chosen as its venue. It turned out quite well. Normally, we're in sleepy business hotels in the outskirts of the city where the 100-150 nerds & geeks of E2E more or less take over the whole hotel. This time around,  it was a hip & happening hotel, not far from the city center that was full of young people working at large tables in the lobby and there were some rugby teams staying there for an international rugby tournament. It may have been a shock at first, but hey, Amsterdam is used to weird people so we blended in pretty soon.

Although the event starts on Friday morning, the best time to arrive is Thursday afternoon/evening. You drop off your things in your room and head down to the bar. Some other E2E attendees may already be there,and as the night progresses more and more familiar faces will come in. This time it started off slow because the hotel had two bars (one in the lobby and one on the roof). Also, the event was situated in the Netherlands. With most of the attendees being Dutch – no matter in what part of the world the event is held – and Holland being a small country, you have plenty of time to drive in on a Friday morning, even with the traffic jams. Some of them even did some work first and arrived Friday afternoon.

According to tradition, Alex Cooper, the organiser, opened the event with a hilarious keynote and overran his time, ruining the agenda for the rest of the day. It's good to have things you can count on in life and this is one of them. The entire audience got glasses with a black bar across them in order to comply with the GDPR hype. The sessions on the first day are reserved for the sponsors and I must admit I missed some of them because I had to work on my own presentation. In line with E2E tradition, my presentation was scheduled first thing Saturday morning and it wasn’t finished. Perhaps we honour those traditions, because we have to adjust to the ever changing landscape of IT in our day to day work. The sponsor sessions tend to be a little less technical than the rest but that is understandable, they have to try and win some new souls to justify the investment. I've been doing that for RES for the past 9 years. As always Gunnar from Censornet closed the first day (again with a PowerShell automated presentation) before we headed to the other side of the street for burgers and beer. During this meal, Jared made a brave attempt to tell us something about NVIDIA but much to his frustration everybody paid more attention to their food. Dinner was followed by  a bus tour through Amsterdam, again a tradition in E2E. Over the years I've grown to love this type of tourist attraction because I've learned that it is the fastest, easiest and laziest way to get to know a city. Even if you think you already know the city, the guide always manages to feed you with new trivia. The tour was finished around 22:30 and we we had been “on our feet” for 12 hours.. The group became a bit scattered and after going up and down the elevator between the lobby and the roof I gave up and went to my room to finally finish my presentation.

On the second day, the presentations were divided over two rooms; people would have to make a choice. I started the day with a presentation together with Chris Twiest. However, 15 minutes before the start of the day it was not clear (or decided) yet whether room 1 was in the basement and room 2 was on the roof at the 7th floor or the other way around. So I decided to commandeer the roof top because of the view and the fact that a band had been playing in the basement room a few hours before and you could still smell it. To a professional event organiser this may sound like absolute horror but this is part of the charm of E2E and all the attendees are OK with it, probably because they are typically the guys and girls who are brought in when the planned stuff doesn't work properly. And though Alex and the Cooper sisters are running the event, there is always room for some democracy to make things work. 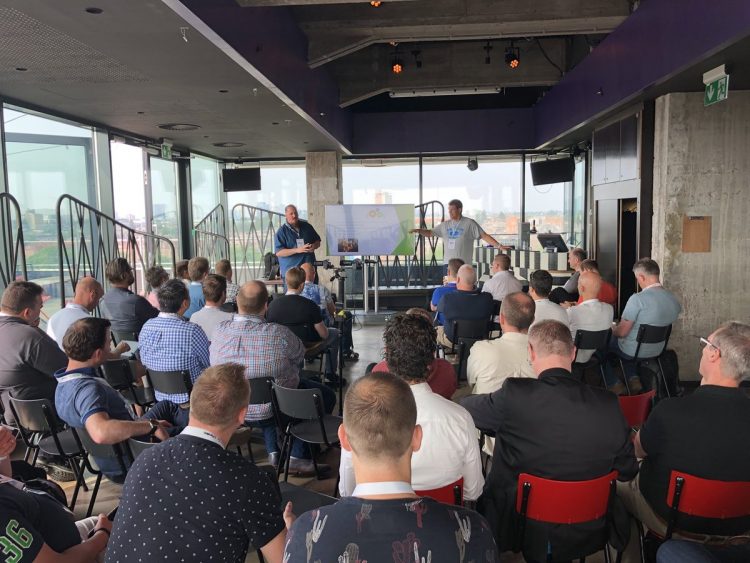 The smaller breakout rooms result in more intimate and interactive sessions. Often enough the presenter gets into a discussion with the audience regarding the topic at hand. There were interesting sessions from Shawn Bass, Avanite, Tim Mangan, ControlUp, FSLogix and more. I fail to remember in which order and on which day they were held and I'm afraid that had nothing to do with the alcohol consumption but more with the fact that I didn't take notes and Alex takes away the agenda once the event is over.

The second day was ended with a lovely canal boat trip where the attendees could sit back, have a beer, look at the city gliding by and have a chat with the other attendees. What a nice way to spend a Saturday evening. This also illustrates the true value of E2E and that is the networking part. Where else can you have a beer with the CEO of Liquidware and get acquainted? At E2E, everyone is an attendee and everyone is a (potential) presenter and it is not uncommon for a first time attendee to start planning their presentation for the next event. It's not scary at all, the event is filled with people who take their work seriously but themselves not so much. How else can they sit in sessions from 10:00 till 19:00 on a weekend day?

On a personal note I enjoyed the event very much, as always. Currently, I am on a diet and I had to maneuver around greasy snacks and too many beers to keep the damage acceptable. You can imagine my surprise when I came home and found that I actually lost weight during the weekend. I could have had a few more beers... I made some great new connections and I managed to start some partnerships with companies that might help me develop my company, which I started 6 months ago. Because it is not all fun and games, despite its reputation, E2EVC is a serious event where important connections are made that will help people develop their careers and I'm proud to be an Ambassador aka Grandfather for it.

Up to the next event in Athens, which is going to be special in many ways. For starters, it's going to be the 40th E2EVC/Pubforum and for me it has been 10 years (give or take a few days) since I first attended the event and this is going to be my 2oth attendance.